Hexagons, while also a six-sided shape, is the underlying representation of the earth on the Helium network. Based on Uber's H3 index, the surface of the earth can be represented by a grid of hexagons at different resolutions, with higher resolutions covering a larger area, and the smallest resolution covering centimeters of the earth. To understand the technical details and the implementation, please check out the

blog one of the core developers.

Since the genesis block, Hotspot locations have been represented (and continue to) in resolution 12, a semi-precise point location covering 300 m² (3200 ft²), which is comparable to the footprint of a large house. This is why some Hotspots appear to be "a few houses down from where I asserted". But, as the network expanded, concerns over security and privacy regarding Hotspot locations grew alongside it.

Hexagons in the App

To improve privacy, security, and understand scaling, Helium is introducing hexagons in the Helium app.

The hex your Hotspot belongs to is derived from its resolution 12 location, and scaled up to its parent resolution 8 hexagon.

Resolution 8 hexagons may be temporary. Depending on the outcome of an investigation to see how Resolution 8 asserts affect Proof-of-Coverage, the resolution may change from resolution 8 to 9, or another value. This will be brought forth in a Helium Improvement Proposal.

Viewing Resolution 8 Hexagons is only available on app version 3.3.0 and later.

To view a map of the network, go to the Hotspot tab. 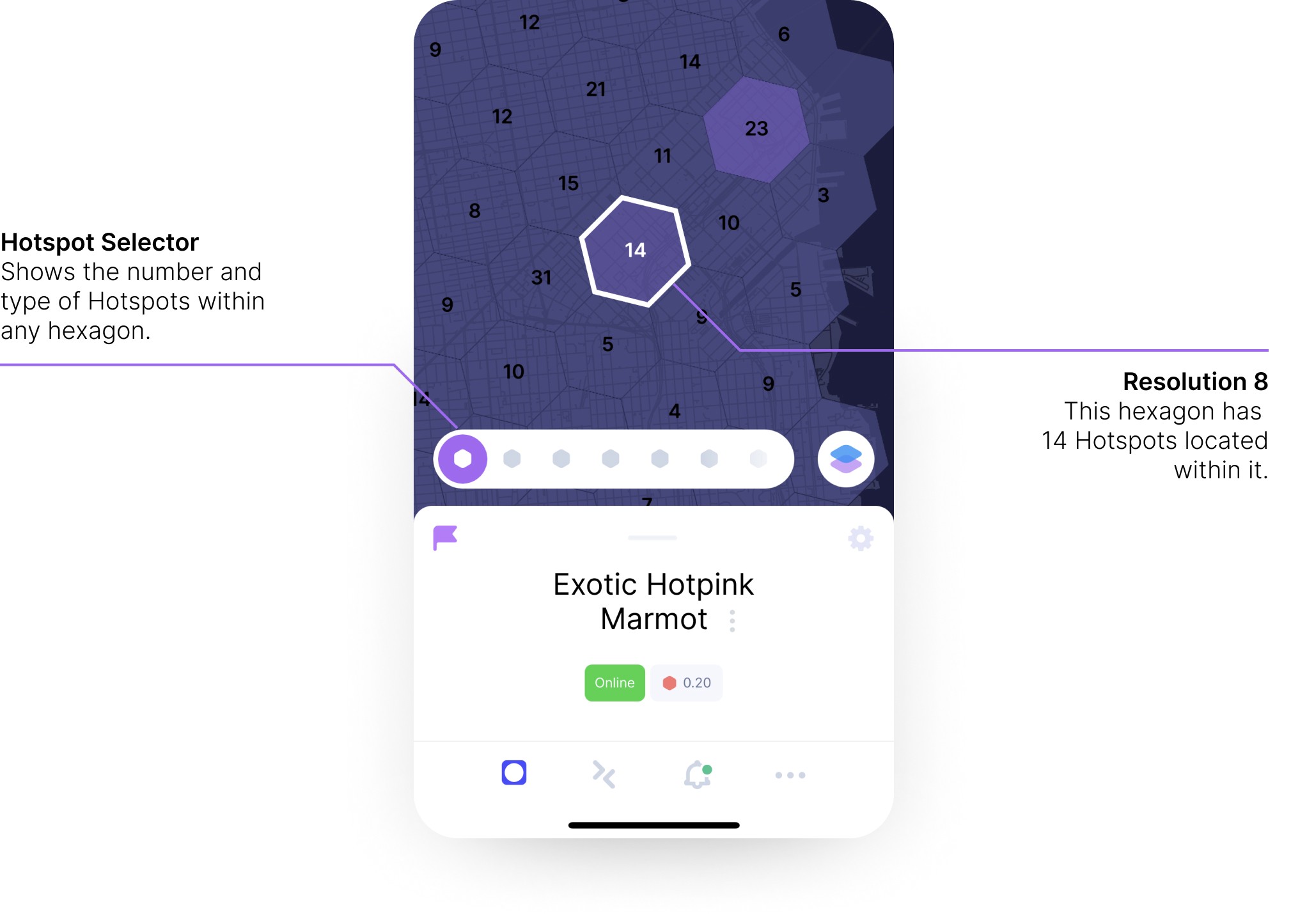 Each occupied hexagon will have a grey hexagon representing 1 Hotspot. Hexagons with more than 1 Hotspot will show a number.

Tapping on a hexagon with a number will bring up a Hotspot selector, showing the Hotspots inside that hexagon. Slide through the selector to see each individual Hotspot.

The Owned and Followed Hotspot Map layer is displayed by default.

Removing point location and grouping Hotspots in a hexagon resulted in new design challenges: How do we show different Hotspot attributes as a group? What if a hexagon had a mixture of different transmit scales, or what if only one of three Hotspots in a hex is a witness? 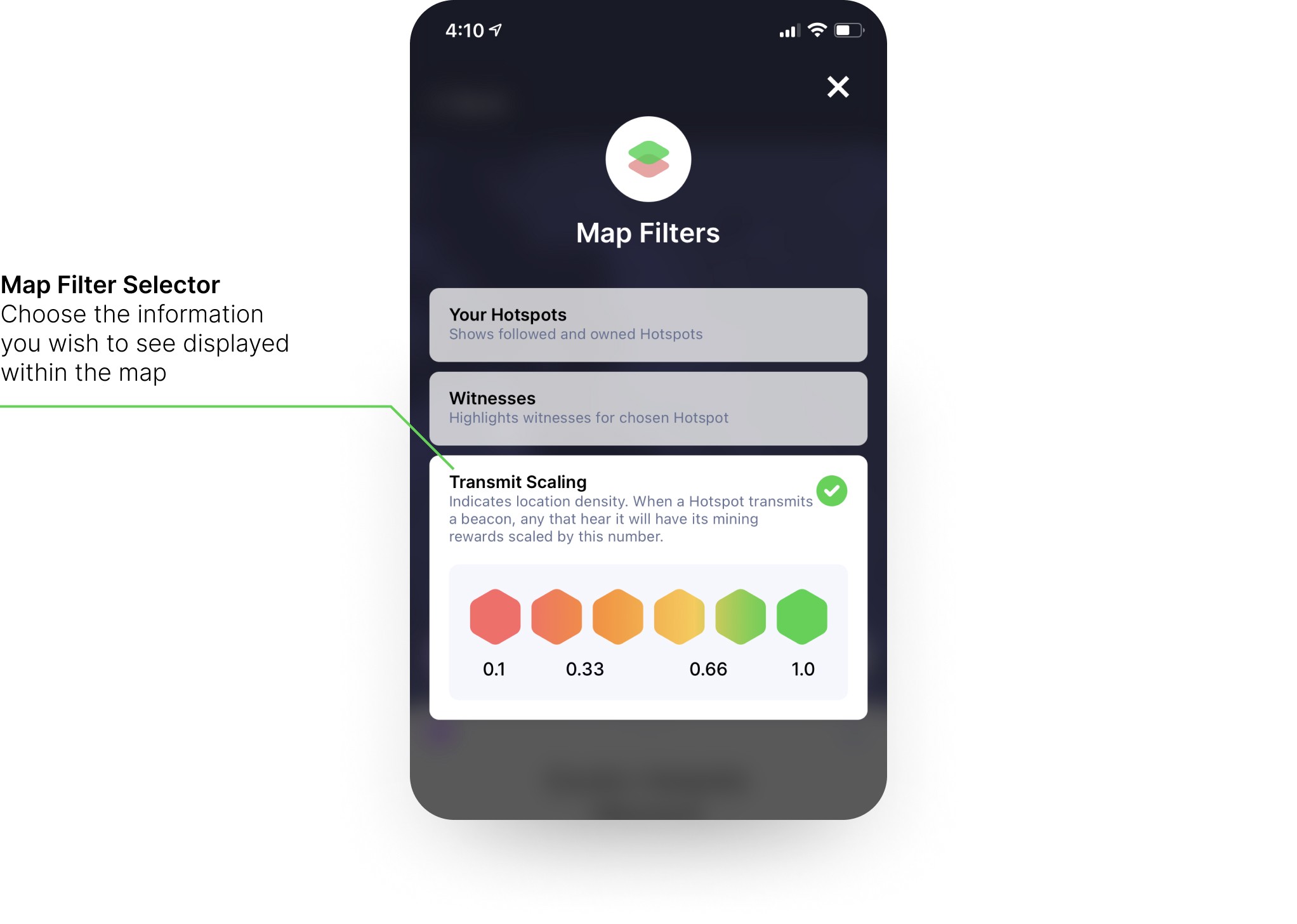 This layer colors hexagons where you own or follow Hotspots. If the hexagon contains both followed and unfollowed and/or owned and unowned Hotspots, you will see a blue or purple color indicator. 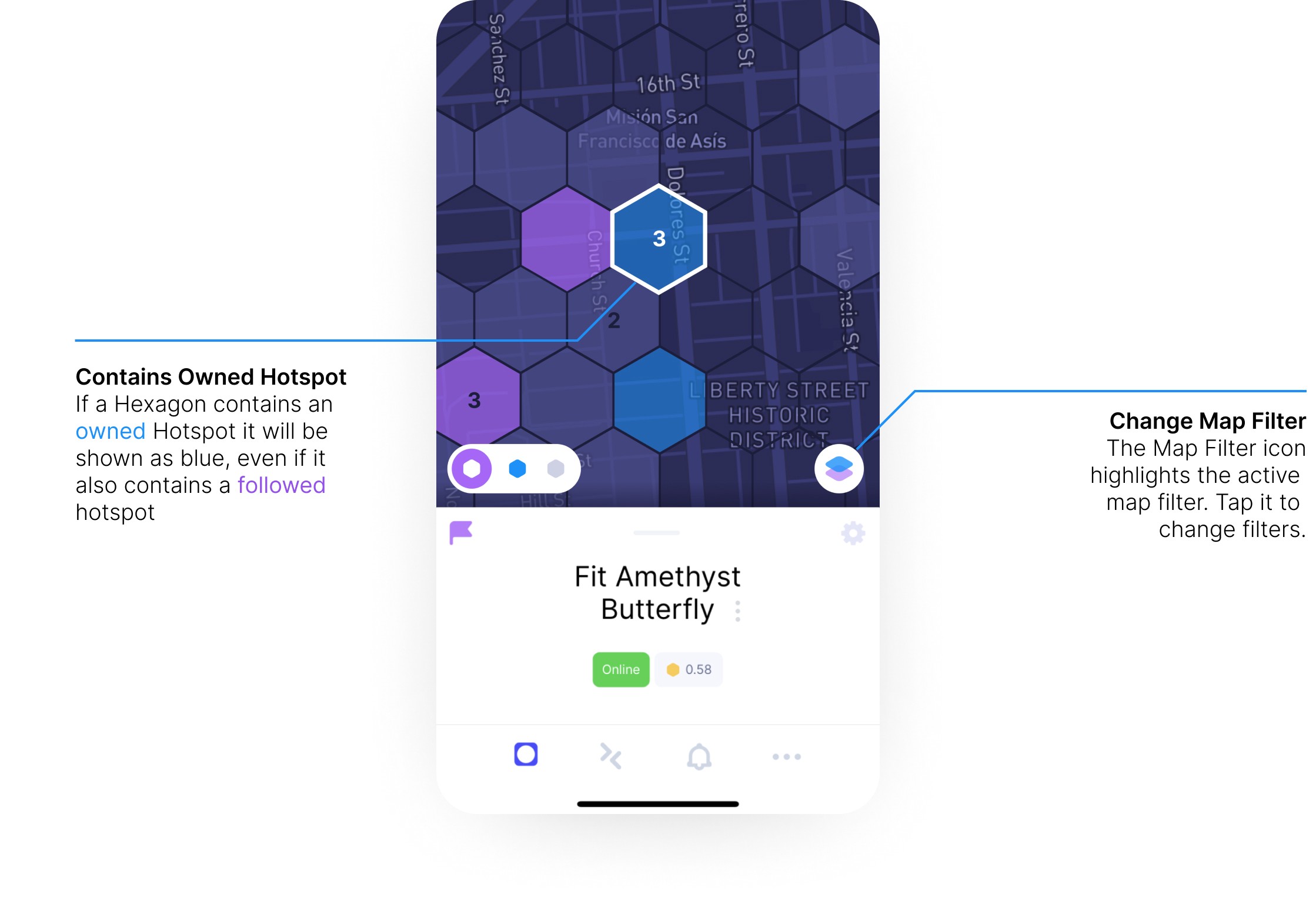 This map layer, when selected, shows yellow hexagons of Hotspots that have witnessed the selected Hotspot (outlined in white - in this case, Magic Fleece Terrier). 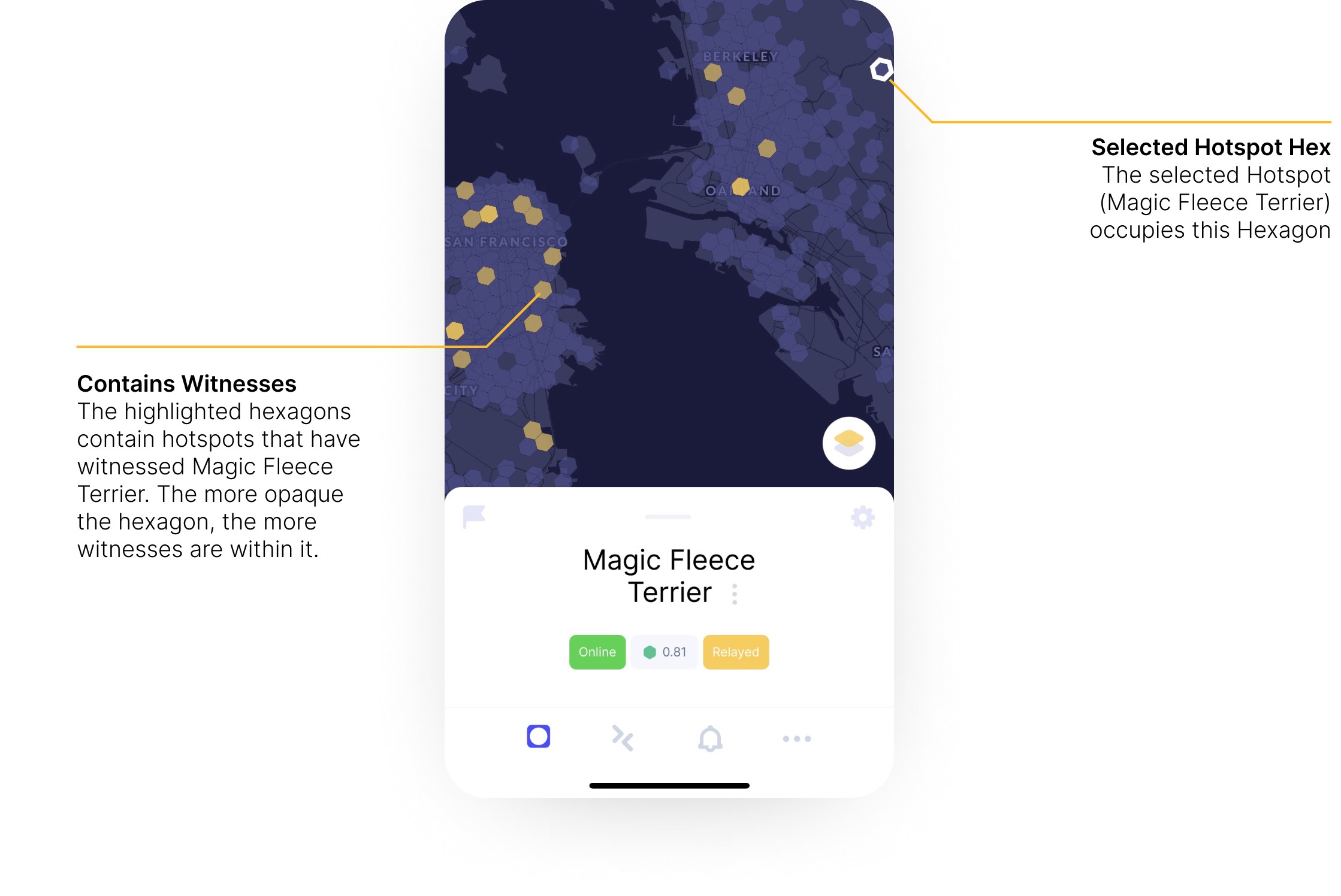 To view a list of Hotspots that have witnessed your Hotspot, switch to the Witnesses tab. 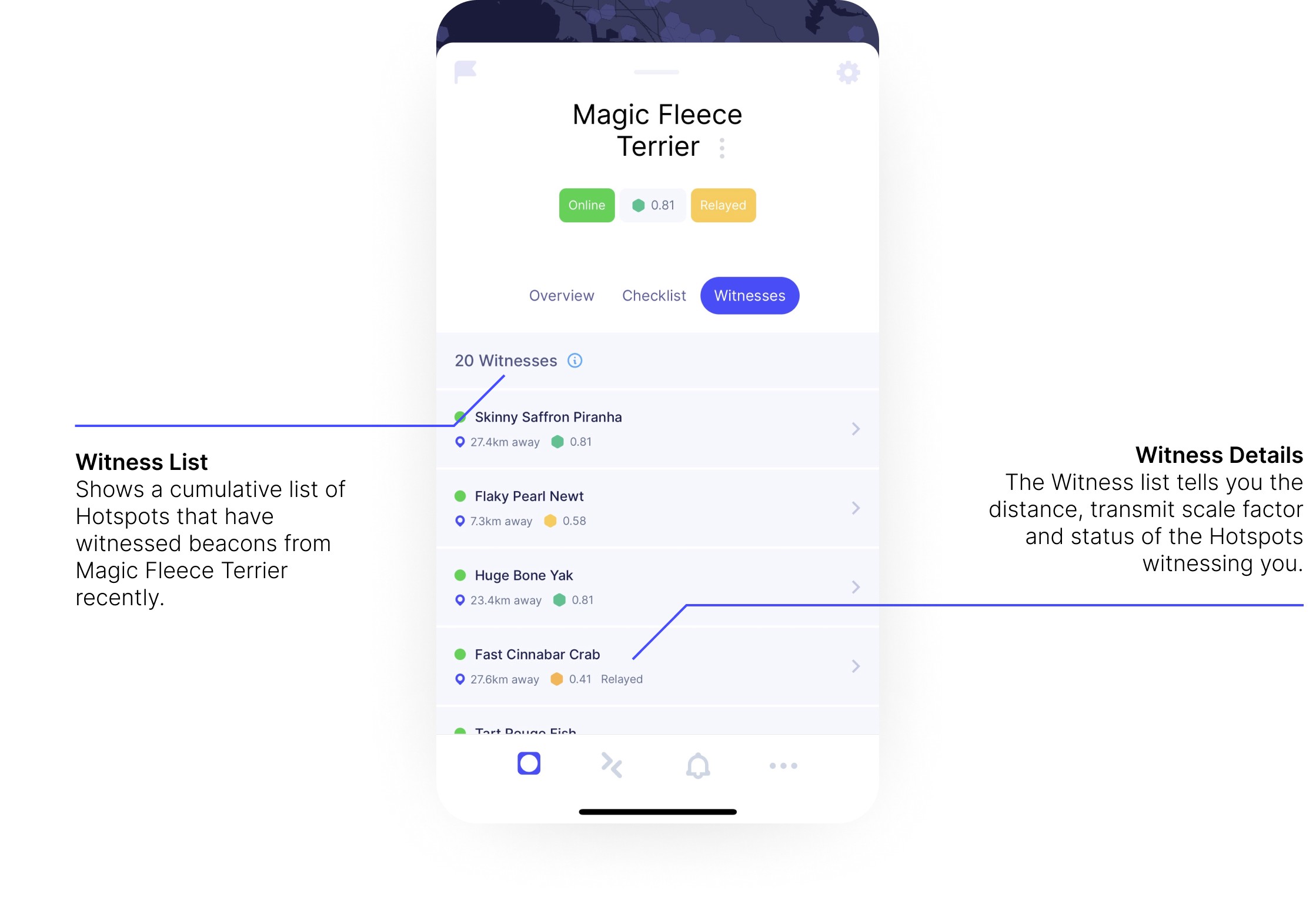 These Hotspots have recently witnessed a Beacon from Magic Fleece Terrier based on Proof-of-Coverage receipts.

Previously known as Reward Scale, the Transmit Scale has been renamed to properly explain what this number conveys.

Transmit scale is a multiplier that is applied to rewards of any Hotspot that witnesses you. The scale also affects how many rewards you receive as a Challengee.

The number is a representation of how dense a hexagon is (how many Hotspots occupy that hex) at various resolutions (from resolution 12 down to resolution 4). This means that if any Hotspots assert themselves within the 1770 km² area surrounding your Hotspot, your Hotspot's transmit scale can change. If you're interested in how this is calculated, check out the

To counteract the effects of a lower transmit scale, it is recommended that Hotspots improve their antenna setup (outdoors, higher gain, higher elevation) so it can witness beacons of Hotspots further away, with potentially higher transmit scales. This ensures a low-scaled Hotspot can continue to earn at an optimal level.

TLDR: Low Transmit Scale does not mean your Hotspot is doomed! Make sure you have a great setup so you can witness Hotspots with 1.0 Transmit scales.

In the app, the color of a resolution 8 hexagon is based on the average transmit scale of all Hotspots' scale occupying that hex. 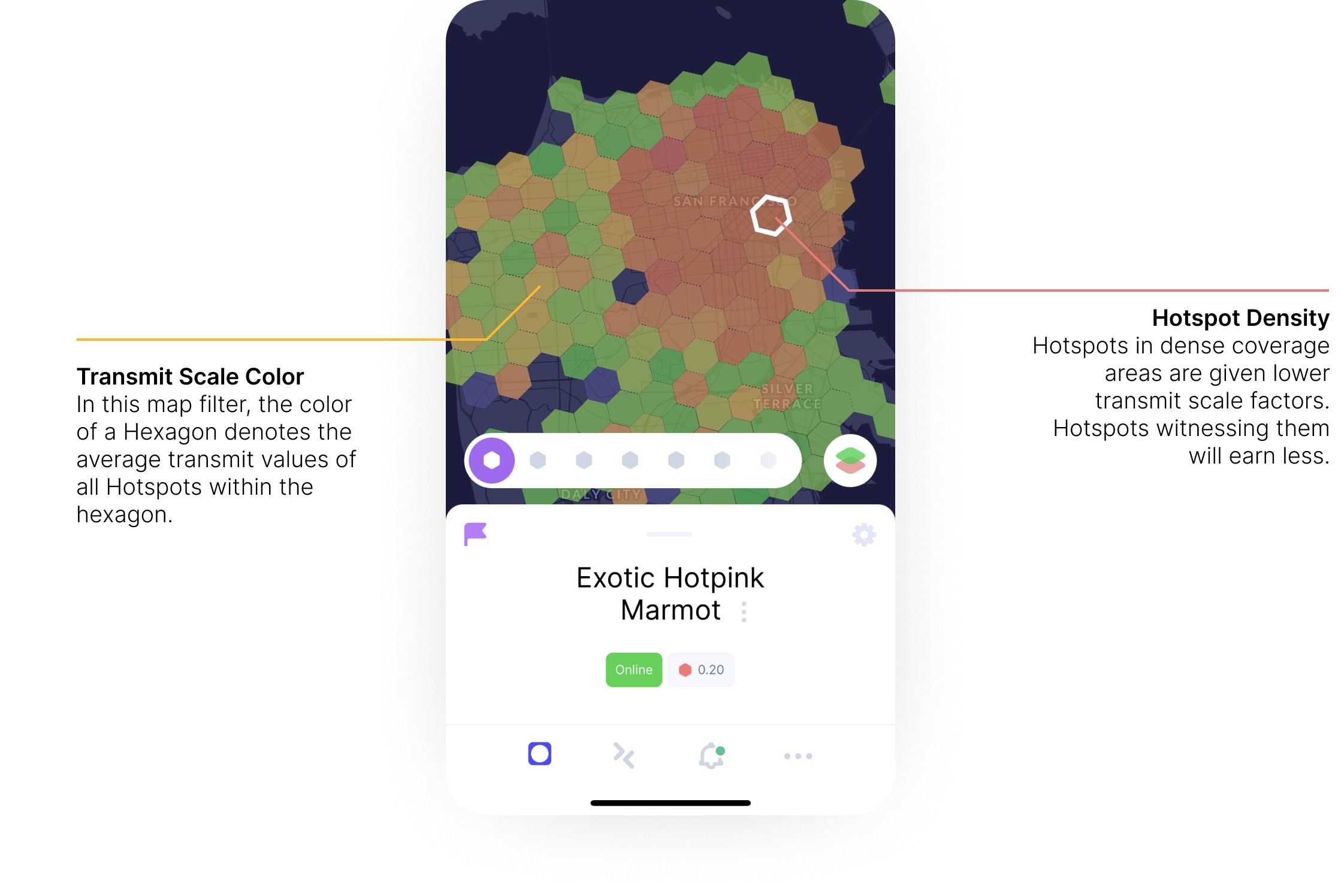 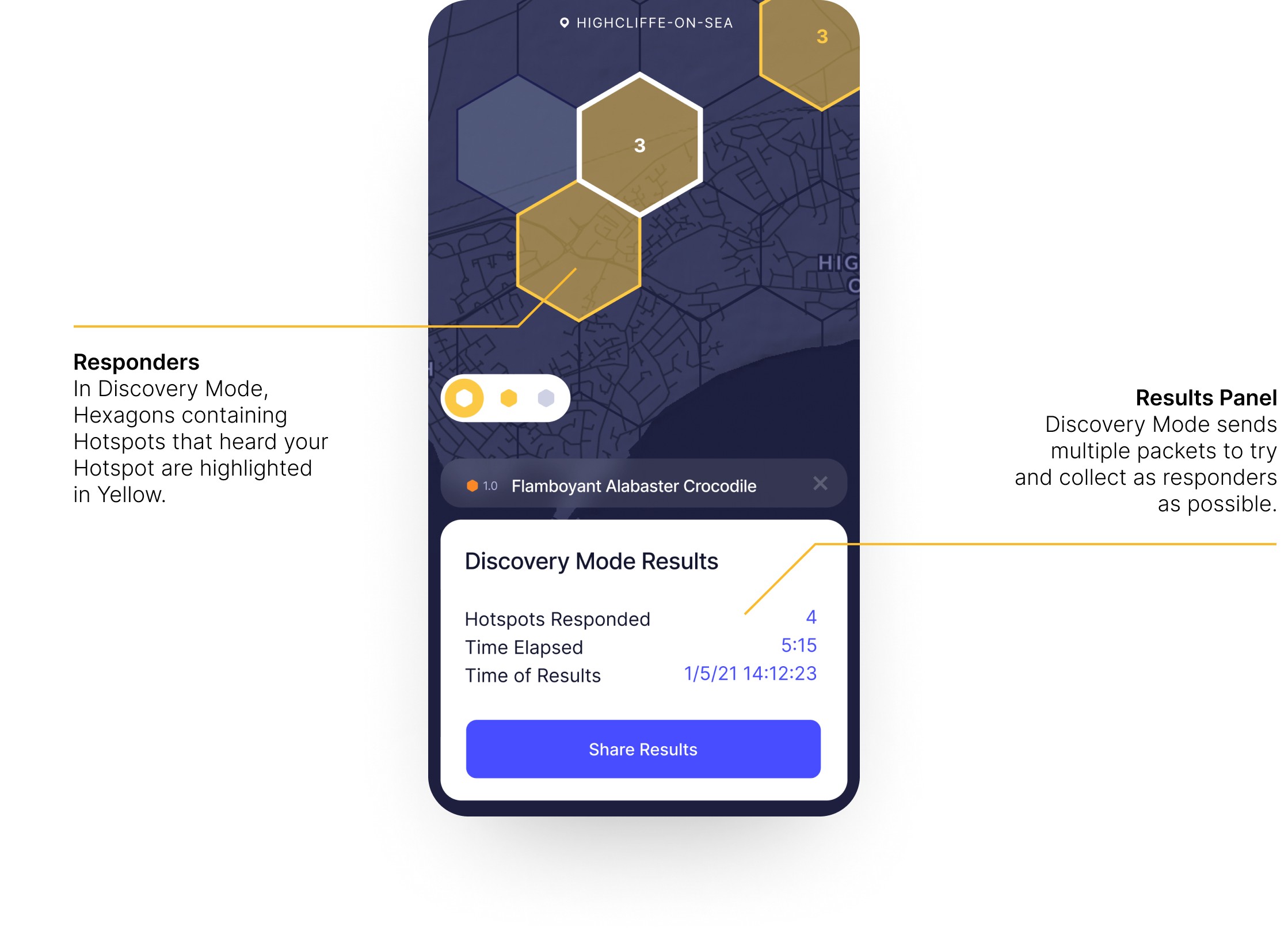 Hotspot can now see how many other Hotspots are occupying hexagons next to them.

It's important to be truthful in where your Hotspot is located for Proof-of-Coverage. Randomly selecting an empty hexagon will not mean the Hotspot will mine more.

Q: Why are there hexagons now instead of exact Hotspot locations?

A: To protect Hotspot owner's privacy, the Helium app and Explorer will use hexagons instead of precise locations to display coverage.

Q: Why is my Hotspot location so far off from the center of the hexagon?

A: For every Hotspot at a resolution 12, we scale up to a resolution 8 and snap the Hotspot location to the center of resolution 8. This is why you may see the location shift. This will not affect how the system calculates proof-of-coverage.

Q: Why is my Hotspot so close to its neighboring Hotspot if I asserted 300 meters away?

Q: Why do Hotspots in the same a hex have such varied scaling values?

A: Yes. Assert Locations are still precise (at a resolution 12). The precise location helps the network formulate proof-of-coverage challenges. Any changes to the assert location resolution will be presented in a HIP and brought to a community vote. There is no ETA for this at the moment.